skip to main | skip to sidebar

...now I'm coming back home. New and without pretense. If you were reading and enjoying this site forgive my abandonment, but this blog will no longer be updated. I invite you to read my new and current site, The Large Print. The reason for the dissolution of this site can be found there.

My hope is that if you start reading along with me here you will not be disappointed. 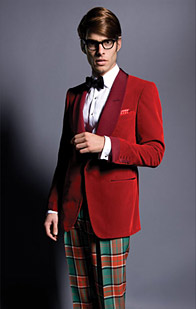 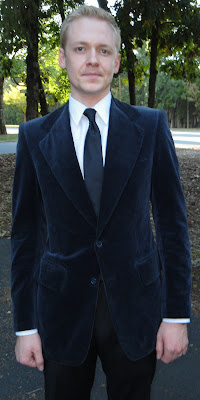 This will be quick. For the Fall and Winter seasons, it is imperative to have a velvet jacket at your disposal. The velvet jacket can dress up blue jeans for a casual ensemble, and can serve as the focal point for alternative black tie.

The key is this; with jeans, wear a crisp white dress shirt sans tie. The shirt should be nicely fitted. For alternative black tie, wear a black bow tie, black trousers, and either black cap-toe shoes, velvet loafers, or opera pumps (scratch that... save the pumps for white tie... unless you're in for serious rule breaking).

One should still wear a nicely fitted white dress shirt or a tuxedo shirt, although the look works better without a tuxedo point collar, but rather a spread or traditional point collar. French cuffs look best, and a subtle tactile texture in the shirt comes across very nicely.
For in-betweens (pictured) keep it minimal. White shirt, black neck tie (or solid color complimentary to your jacket color), black trousers, nice black shoes. Go bold if you must, with a brightly colored velvet jacket, such as this red Tom Ford offering with shawl collar (photo 2), but feel free to throw in some pattern to add some nonchalance and to deformalize the look a bit. For more formal occasions, one can never go wrong with midnight blue (left). In all cases, be respectful of the inherent formality of the velvet jacket and allow one 1/2 inch of cuff to show.
Velvet jackets are available from very low to very high prices, from a multitude of designers. I am wearing a customized vintage Hickey Freeman in photo 1. Tom Ford offers something similar today, but for lower prices, check Calvin Klein at Macy's, or just browse. Velvet jackets are big this season and everyone offers them. Get down with it!
Cheers,
Paul 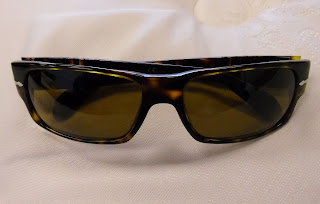 It has been a while since I last wrote about sunglasses, but I have in the past mentioned my love of Italian sunglasses manufacturer Persol, and in an unrelated post, discussed the refined, insouciant character offered by a lighter colored pair of sunglasses than basic black. Today, I combine the two. Persol sunglasses, and tortoise-shell frames.
Persol calls their tortoise-shell colored frames "Havana". Call them what you like, the lighter colored frames catch more attention and can better compliment a colorful ensemble than black frames. Black is unimaginative in most cases- granted a black suit and shoes would probably cry out for black sunglasses, but in other scenarios, a lighter frame accents the different color hues in most clothing. 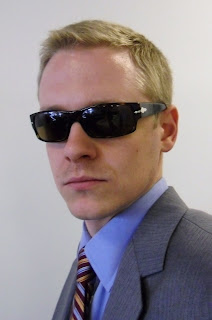 I personally have been blessed/cursed with a fair complexion, light hair and skin tone (yeah, that's me on the right), and tortoise-shell frames break the stark contrast that is achieved when I wear all black frames. Conversely, individuals with either olive, brown, or reddish skin tones will have their complexion complimented by the different shades of brown and amber present in a tortoise-shell frame. Everybody wins, you see.
My newest aquisition are these Persol 2720-S sunglasses, which were worn by Daniel Craig's James Bond in the 2006 film, Casino Royale (see picture, below). I opted for the brown lenses while Bond wore frames with green lenses, but I like the way that the Persol brown-orange lenses block out all the sunlight without making indoor lighting seem nonexistant (for the times when walking indoors briefly after forgetting your phone at home or dropping something off at the post office or making a bank deposit... not when gong out clubbing and trying to look cool by wearing shades indoors... you actually look like a douchebag when you do this. Trust me). 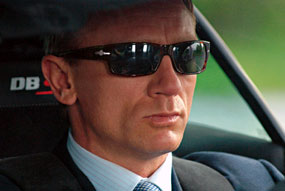 I have quickly fallen in love with this pair of shades. My wife tried to "adopt them" and I told her she'd better start trying to come up with a way to bump me off if she wants to inherit them. Like Charleton Heston said, "...From my cold dead hands." They're mine. I offered her my Ray Bans. She refused.
For those who are unaware of the history, Persol comes from the Italian words per il sole, meaning, "for the sun". The brand was founded in 1917 by Giuseppe Ratti. Its trademark is the silver arrow, and several of the company's glasses feature this symbol.
Persol was a heavy influence in the production of sunglasses. The company developed the first flexible stem.
Persol was introduced to the United States in 1962. Its first boutique opened on Rodeo Drive in Los Angeles in 1991.

Steve McQueen popularized two Persol models: the 714 folding sunglasses and similarly styled 649. He wore a special pair of 714's with blue lenses (now avaiable as a Steve McQueen Special Edition model at http://www.persol.com/) in The Thomas Crown Affair and was often photographed wearing the 649 model.
One of the most iconic images of Persol sunglasses can be seen in the movie Divorce Italian Style where Marcello Mastroianni wears a pair of black 649s; Mastroianni also has a pair of Persol sunglasses on in almost every scene in the movie La Dolce Vita.

Persols can be seen on celebrities as frequently as plastic surgery. Jack Nicholson, Jake Gyllenhall, Jay-Z, George Clooney, Sharon Stone, Pierce Brosnan, Bill Murray, and a slew of others are seen wearing them regularly, but that's not to say that celebrity iconography is what makes them worth a damn. 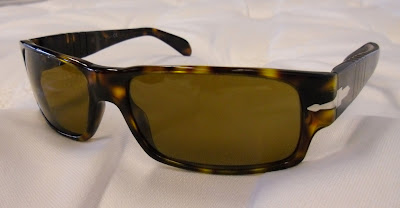 Persols are durable, stylish, and fit like a glove, thanks to the brand's patented "Meflecto" cylinders in the arms, which hug and flex comfortably around the wearers temple to provide a custom fit. The lenses are made of high-impact glass rather than plastic, and resist scratching better than any other sunglass lens on the market. The lenses also provide unsurpassed clarity. Each pair is hand-made in Italy and no two pair are absolutely alike, like a utilitaritan piece of art that one can wear on his face.
Upon reflection, I don't know exactly what the purpose of this post was, whether it was to plug Persol, make a James Bond reference, promote tortoise-shell frames, or just to say, "Hey, check out my new toy." Maybe it was a bit of all of these reasons, but I can guarantee you this: each reason was in the service of style. After all... that's why we're here. Isn't it?
Cheers.
-Paul

Esquire Has Done it Again! 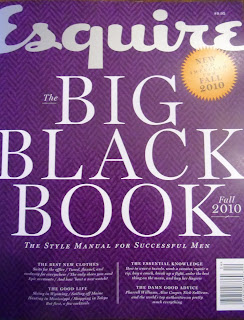 New for Fall 2010, Esquire magazine has released its latest offering of the semi-annual Big Black Book: The Style Manual for Successful Men.

This edition has a wealth of fine information with features on everything from Cars, Watches, Colognes, Writing Instruments, Holiday party beverages (the good ones: with booze), Socks, the ways to wear Black-Tie, Outerwear, a dissertation on absolutely everything one needs to know about wool, Tweed, a nice two-page spread on L.L. Bean Signature, and much, much more.
Without giving too much a way, a couple of page shots are pictured here, but the style-conscious man owes it to himself to pickup a copy. The newest Black Book is available at newstands for $9.95, or from http://www.esquire.com/.
If you are currently not an Esquire subscriber, the magazine is offering a great special now; the current Black Book and a one year subscription to Esquire for only $14.95. Very well worth it. Check it out!
Cheers,
Paul

I love the feel of this video. Both warm and nostalgic, this video captures the beauty of this all-American preppy brand. Enjoy.
-Paul

For a little fun and nothing more...
Enjoy!

Check out the link below for a video of great tips from one of Atlanta, Georgia's premier clothiers, Sid Mashburn. Sid combines the best from Italian, English, and American Prep styles to create a winning look. Selected as one of GQ Magazine's 10 most stlish men last year, the words of Sid Mashburn will take you far in the realm of men's style. The video link supplied briefly covers essential clothing pieces, plus how to get some utility out of your dressier wardrobe items. Check it out!
Sid Mashburn Video

Paul Walters
I am here in pursuit of lovers of style; those who have developed their own style and maintain it with integrity.

Any borrowed images and videos that appear on the site are copyright by their respective owners and Paul Walters claims no ownership. If you own the rights to any images or videos and do not wish for them to appear on this site, please contact me, proof included, and they will be promptly removed.